Mattheos Josaphat (1937-2022) was born in Katerini. He graduated from the Medical School of the University of Athens in 1963 and acquired the specialty of Neurologist-Psychiatrist in 1967. He moved to London for further studies, where he remained for fifteen years. There, after exams, he received various diplomas in Psychiatry and Child Psychiatry (Diploma in Psychological Medicine, highest Diploma in Psychiatry of the College of Psychiatrists, etc.). Elected director in the National Health System (Finchley Center for Child and Family Psychiatry, London). He taught at the Towistock Center and the University of London (Medical Postgraduate Centre) as a Senior Lecturer. He completed a formal five-year training in Psychoanalytic Psychotherapy and four years in Group Analysis and Family Therapy. Upon his return to Greece, he was elected director of the Attica Children's Psychiatric Hospital. He founded with others the Hellenic Society of Psychoanalytic Psychotherapy, which trains in individual psychoanalytic therapy, and the Hellenic Society of Group Analysis and Family Therapy (1983), of which he was the first president and director of its Educational Institute. He was a regular member of many international scientific societies and has participated in the writing of many scientific books and numerous articles. He was invited to speak at many centers abroad (Oxford University, London School of Economics, etc.) as well as at numerous hospitals, scientific centers, the Megaron Plus lecture series, etc. Founder, with other colleagues, of the Child Psychiatry Society of Greece, of which he was elected the first President.

He had a vast breadth of knowledge. He belongs to the last of the psychoanalysts who, in England where he worked, socialized with those we only read about today: Anna Freud, Foulkes, Winnicott etc.

Matthew Josaphat played a catalytic role in the creation of modern psychoanalytic thought and contributed to its wider dissemination both through his written work and through his numerous lectures and interviews. The simple and understandable way of presentation was one of its important features. He loved poetry and literature. He often drew his references from Greek letters, such as Elytis, Kazantzakis, Seferis, Cavafy etc. He was an excellent student at school and as a student in Katerini he was awarded nationally as a poet. He mentioned this as something special for him.

Especially dear to all of us who were lucky enough to know him and to be with him for many years while he was for many of us an inexhaustible source of inspiration and empathy. Personally, I owe him a father I got, siblings I got, I owe him a house that was his office and the Hellenic Society of Analytic Group and Family Psychotherapy. I owe him the person I have become and am constantly evolving. I will carry something of him forever in my heart.

My dear Mr. Josaphat, thank you and thank you! 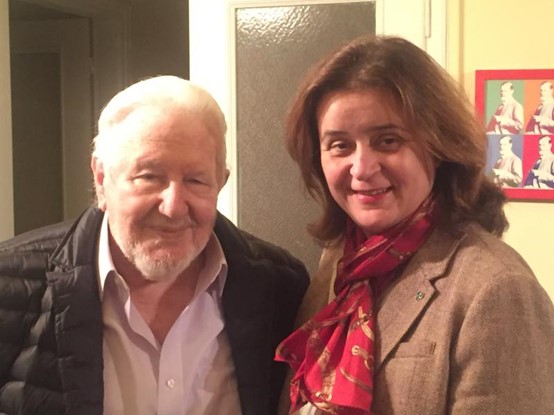