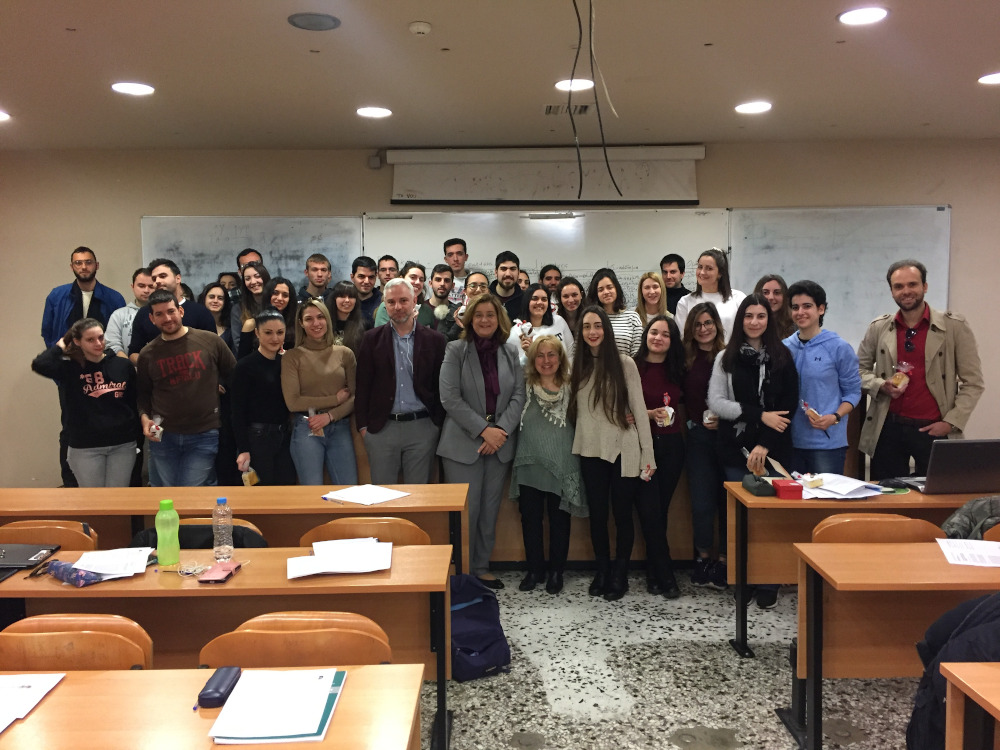 A nice surprise awaited the students as the New Year's cake was cut  at the first course with the scientific director Dr. Vasiliki Brinia and the Program professors,  Dr. Yianna Voukelatou and Dr. Athanasios Androutsos. Together they exchanged wishes for an equally successful spring semester full of joyful knowledge and experiences. The lucky coin was found by the student Argyro Karachaliou who, along with the coin and wishes, also won a rare educational book!

Then the scientific director of the Program Dr. Vasiliki Brinia presented the innovative actions  that will be developed during the spring semester which are "Life Lessons in Schools I and II", "Art and Education", "Education, Entrepreneurship and Culture" and "Freinet Pedagogy". For each of these activities, the projects to be done during the spring semester by groups of the students were developed.

In particular, the main actions that will take place in the spring semester were discussed : the completion of the cycle of experiential activities-stimuli of the innovative actions "Art and Education" and "Education, Entrepreneurship and Culture", in the context of which a series of stimuli and visits to art sites and Eleusis during the winter semester were held. In the field surveys they participated in, the students of the Program extracted a multitude of stimuli. Especially, in the "Art and Education" action, by participating in groups, the students will create their own artworks, which will be exhibited in the framework of the now established annual Scientific Conference, which will take place in May at Athens University of Economics and Business. In the process of creating the artworks, which this year will have the "Student" as their focal point, will help artists of the School of Fine Arts.

Focusing on the student, a stimulus occurred during the first lesson for the spring semester, where the personal story she had sent to Dr. V. Brinia in May 2018 as second grade student of an Athens Lyceum was read by the students of the Program . Influenced by the May 2018 Scientific Conference on "Diversity in the School" at AUEB, she recorded her thoughts and feelings about the ideal teacher, who is nothing but inspiration and appropriate director of discipline and, as another “actor” not only physically but mentally  locks his "spectators". The vision given by the schoolgirl to the ideal teacher, presenting him/her mainly as a person with a strong value system, came as an impetus to be added to the poem of Dimitrios I. Antoniou, read in class, "The Bad Merchants", about those "merchants" who did not sell their property cheaply. Those "traders" who did not irrevocably surrender their values ​​and ideals in order to be liked by their social surroundings. Those "merchants" who did not overestimate their powers and did not thank their vanity with cheap selfishness. Every new prospective teacher prefers to remain a "bad", according to Antoniou, a "trader" who remains true to his values. This is what the students of the Program are supposed to feel as they embark on a demanding but most exciting journey in the spring semester that has begun dynamically!

Have a nice spring semester!